The creation of a DigitalTwin knowledge graph data model confronts the need for access to measurement data in order that the DigitalTwin can create timely performance metrics, identify promptly performance issues, and so on.

However, the quantity of raw data in an Industrial IoT is staggering. A typical process manufacturing plant might have greater than 100,000 measurement points each of which is streaming data by the second or even faster. So how can the raw data be integrated to allow performance analysis?

See this short video demonstration of how easy an #IoT-connected #DigitalTwin of a process plant #IntelligentGraph can be created:

Data is rather like poor red wine: it neither travels nor ages well. IntelligentGraph avoids data traveling by moving analysis into the knowledge graph rather than moving data to the analysis engine, obsoleting the groundhog-analysis-way

Data is streamed to the IntelligentGraph datastore, and then analysis/calculation nodes are added to that graph which is accessible to all and by all applications.

The IntelligentGraph-way of data-analysis is to:

Data is in the operational data-sources, data is staged in a data-warehouse/mart/lake, then the analysis is done by the analysis engine (aka Excel), right? And like poor red wine, constantly moving data damages it.

The Groundhog-way of data analysis is to:

IntelligentGraph moves analysis into the knowledge graph rather than moving data to the analysis engine, avoiding the groundhog-analysis-way:

The following are screen-captures of a Jupyter-Notebook session showing how Jupyter can be used as an IDE for IntelligentGraph to perform all of the following:

GettingStarted is available as a JupyterNotebook here: 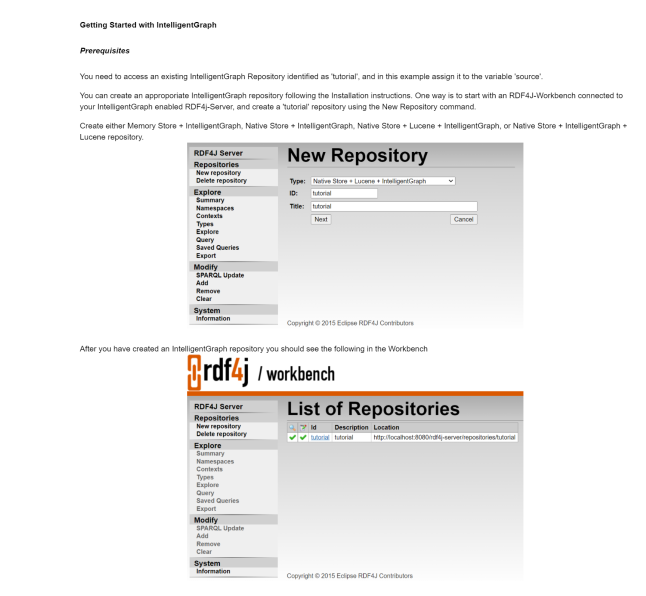 Using the Jupyter ISparql, we can easily perform SPARQL queries over the same IntelligentGraph created above.

We do not have to use Java to script our interaction with the repository. We can always use SPARQL directly as described by the following Jupyter Notebook. 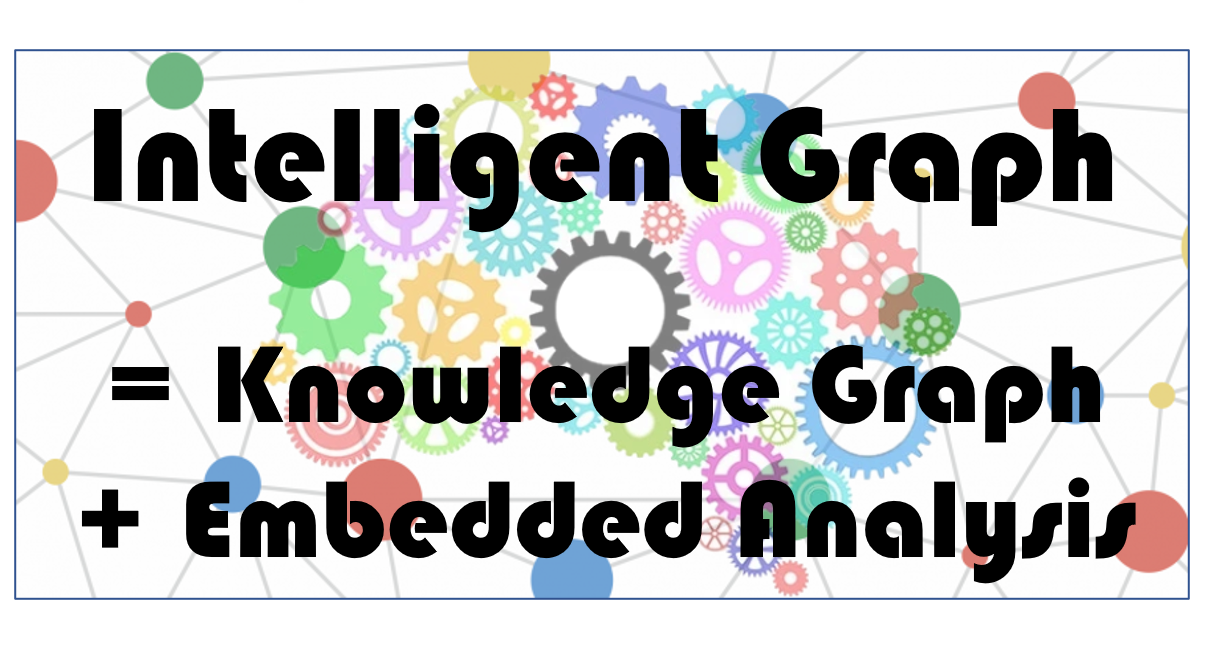 IntelligentGraph embeds calculation and analysis capability within RDF knowledge graphs, rather than forcing analysis to be undertaken by exporting query results to external analysis applications such as Excel.

IntelligentGraph achieves this by embedding scripts into the RDF knowledge graph which are evaluated when queried with SPARQL.

Scripts, written in a variety of languages such as JavaScript, Java, and Python, access the underlying graph using simple pathPatternQL navigation.

At present calculations over stored data are either delivered by custom code or exporting the stored data to spreadsheets. The data behind these tools is inevitably tabular. In fact, so dominant are spreadsheets for analysis that the spreadsheet itself becomes the ‘database’ with the inherent difficulties of syncing that data with the source system of record.

The real-world is better represented as a network or graph of interconnected things Therefore a knowledge graph is a far better storage organization than tables or objects. However, there is still the need to perform ad hoc numerical analysis over this data.

RDF DataCube can help organize data for analysis, but still the analysis has to be performed externally. Confronted with this dilemma, knowledge graph data would typically be exported in tabular form to a datamart or directly into, yet again, a spreadsheet where the analysis could be performed.

IntelligentGraph turns this approach on its head by embedding the calculations as scripts within the knowledge graph. These scripts are evaluated on query, and utilise the data in situ: no concurrency issues.. This allows the calculations to have knowledge of its neighbouring nodes and edges, just like Excel cells can access other cells in the spreadsheet. Access to other nodes within the graph uses pathPatternQL navigation.

An Industrial Internet of Things (IIoT) application is connecting all the measurements about a process plant, such as an oil refinery, into a knowledge graph that relates the measurements to the material flows through the process equipment.

Although there is an abundance of measurements and laboratory analyses available, the values required for operating and performance monitoring are not (and mostly cannot) be directly measured.

These are simple examples; however, they show the reliance on the knowledge graph structure to perform the analysis.

Data is in the database, analysis is done by the analysis engine (aka Excel), right?

In this scenario, the local power user sets up a query to export data from the database and converts to a format that can be imported into Excel. Ever increasingly complex formulae are then written to wrangle the data into the results that are required.

Why is the spreadsheet approach risky?

Solving data analysis with an IntelligentGraph

This is illustrated in the diagram below:

Why is the IntelligentGraph approach so advantageous?

Analysis is embedded in an IntelligentGraph simply by adding script literals as object values of subjects with datatype of the scripting language (groovy, javascript, python etc).

Typically, a graph node will have associated attributes with values, such as a stream with volumeFlow and density values:

Of course, in the ‘real-world’ these measured values are sourced from outside the KnowledgeGraph and change over time. IntelligentGraph can deal with both of these requirements.

The ‘model’ of the streams can be captured as edges associated with the Unit:

The calculations are declared as literals[1] with a datatype whose local name corresponds to one of the installed script languages:

A typical performance metric is to understand the total production from a unit, which is not of course directly measured. However, it can be easily expressed using existing calculated values:

Instead of returning the object literal value (aka the script), the IntelligentGraph will return the result value for the script.

We can write this script even more succinctly using the expressive power PathQL:

However, IntelligentGraph allows us to build upon existing calculations to simply express what would normally be difficult-to-calculate metrics, such as product yield or mass balance.

Any production unit has different valued products. So a key metric is the yield of individual streams. This can easily be calculated as follows, using values that are themselves calculations.

Measurements are not perfect, nor is the operation of a unit. One of the first indicators of a problem is when the mass flow in does not match the mass flow out. This can be expressed as another calculated property of a Unit:

Access to the calculated values is via standard-SPARQL. However instead of returning the script literal, IntelligentGraph will invoke the script engine,

Thus to access the :massFlow calculated value, the SPARQL is simply:

If the script literal is required then the object variable can be postfixed with _SCRIPT:

If a full trace of the calculation, including tracing calls to other scripts, is required then the object variable can be postfixed with _TRACE:

How to Write IntelligentGraph Scripts?

Any Java 9 supported language can be used simply by making the corresponding language JAR available.

By default, JavaScript, Groovy, Python JAR are installed. The complete list of compliant languages is as follows

In addition, each script has access to the following predefined variables that allow the script to access the context within which it is being run.

The spreadsheets’ secret sauce is the ability of a cell formula to access values of other cells, either individually or as a set. The IntelligentGraph provides this functionality with several methods associated with Thing, which are applicable to the _this Thing initiated for each script with the subject Thing.

Returns the value of node referenced by the pathPattern, for example “:volumeFlow” returns the object value of the :volumeFlow edge relative to _this node. The pathPattern allows for more complex path navigation.

Returns the first (shortest)  path referenced by the pathQL, for example “:parent{1..5}” returns the path to the first ancestor of _this node. The pathQL allows for more complex path navigation.

Returns all paths referenced by the pathQL, for example “:parent{1..5}” returns an iterator, starting with the shortest path,  for all paths to the ancestors of _this node. The pathQL allows for more complex path navigation.

Examples of PathQL patterns are as follows:

will return the first parent of $this.

will return the first child of $this.

will return the grandparents of $this.

will return the siblings of $this.

will return the maternal grandparents of $this

will return the maternal grandfather of $this.

will return the mother of $this but using the label instead of the IRI.

will return the grandfather of $this, who is the parent of :Peter.

will return grandfathers of $this, who are not the parent of :Peter.

The following diagram visualizes a path through a genealogical graph, from _this to the find the parents of a maternal grandfather born in Maidstone:

Since IntelligentGraph combines calculations with the knowledge graph, it is inevitable that any evaluation will involve calls to values of other nodes which are in turn calculations. For this reason,  IntelligenrtGraph supports tracing and debugging:

How Do I Add Intelligence to my RDFGraph?

The project is located in Github, from where the intelligentgraph.jar can be downloaded from there:

The intelligentgraph.jar does not include all of the scripting etc language dependencies, so to use it you would have to be certain all dependencies are already available.

The RDF4J server will need to be restarted for it to recognize this new JAR and initiate the scripting engine.

[1] In this case the script uses Groovy, but any Java 9 compliant scripting language can be used, such as JavaScript, Python, Ruby, and many more.